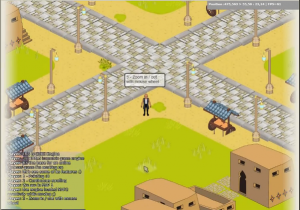 The engine is coded in Javascript from scratch, it doesn’t rely on any 3rd party library

The engine itself doesn’t do any rendering, this will allow to use different rendering methods to target different platforms for example. the actual version uses a Canvas renderer (I’ll maybe write a WebGL renderer later, and a dom renderer for som mobile platforms).

The video bellow demonstrate some features

Some other features will be posted in another video : Multiplayer, particles effects, bots …etc

CUBE engine support both diamond and staggered isometric formats ; the maps are created using tiled editor in tmx format then compiled to an optimized json format (I know there is a json exporter provided with tiled editor but id doesn’t fit my needs 🙂 )

the server side is also coded in javascript on a nodejs server, I’m using nowjs library as a network layer but I’m thinking to move to sockjs and write my own network layer since I don’t need all nowjs features.

the first goal of this project is to write a fully operational browser isometric engine.

then to create an MMORPG based on this engine, but before a fully playable game, I’m planning to release some playable demos as the developement progress :

that’s all for now …